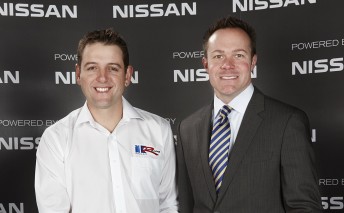 The covers will come off Nissan Motorsport’s 2013 race car today – the first non-Ford or Holden V8 Supercar since the inception of the category in 1993.

Built by the Kelly Racing team, the Nissan Altima will be revealed to the local media at the Docklands, Victoria today.

The launch will begin at 1030 AEST, with and will be streamed live online.

The team’s first Altima, built under the sport’s new Car of the Future regulations, received its finishing touches yesterday, including its unique Nissan livery, before being transported to its unveiling location.

After today’s launch, the car is set to undergo a shakedown track session during the week ahead of the V8 Supercars aerodynamics testing.

Team drivers Todd and Rick Kelly will be at today’s historic launch before leaving the country tonight, bound for this weekend’s V8 Supercars event in Abu Dhabi.

In their absence, the team’s endurance driver David Russell will drive the Altima in its maiden shakedown test.

Stick with Speedcafe.com today for the first images of the newest V8 Supercars contender, plus all the news from the launch.