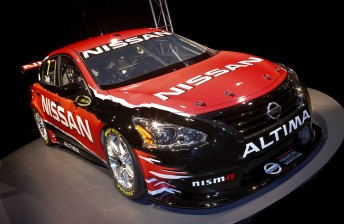 Nissan and Kelly Racing have revealed the look of the Altima race car that they will use for their assault on the V8 Supercars Championship from next year.

The car was the subject of a spectacular media launch in Melbourne’s Docklands this morning, with Nissan managing director and CEO William F Peffer Jr joining team co-owners Todd and Rick Kelly to unveil the car.

Nissan announced in February that it would be joining the category next year under the new Car of the Future regulations, which sees manufacturers compete with a control chassis wrapped in their own bodywork.

Powered by a bespoke 5.0 litre version of Nissan’s quad-cam VK56DE engine, the four Kelly Racing Altima entries will run under the Nissan Motorsport banner next season.

Peffer Jr and Todd Kelly both expressed their pride at making the look of the car public after a solid nine months of development work.

“This is a proud day for Nissan and a significant occasion for the sport of V8 Supercars,” said Peffer Jr.

“2013 will be an enormous year for Nissan in many ways, with several important new models set to launch next year. One of those will be the all-new 2013 Nissan Altima, the first time the Altima nameplate has gone on-sale in Australia, and what better way to introduce Altima to Australia than to have it on-track in the V8 Supercars Championship from the start of next season.

“Everyone at Nissan is right behind our team, led by Todd and Rick Kelly, and we are excited about hitting the track next season with this spectacular Altima V8 Supercar.”

Kelly, who described the car as “the most impressive that V8 Supercars has ever seen”, added: “This is the proudest day in the relatively short history of our team, as well as one of the most significant days in recent times for the sport of V8 Supercars.

“Our team has done a tremendous job to design and build an all-new V8 Supercar, including a new engine, in roughly nine months.

“The Nissan Altima V8 Supercar really is like no other V8 Supercar. Not only does it look spectacular but its unique features and aggressive design ensure that Nissan Motorsport will stand out from the rest of the field.

“The look of the Altima and sound of the VK56DE engine are second-to-none. Once V8 Supercars has homologated the aerodynamic package on the Altima, we will begin our testing to ensure it drives as fast as it looks and sounds.”

The Altima is expected to undertake its initial shakedown this week before being subjected to V8 Supercars’ aerodynamic comparison testing program alongside its Ford and Holden rivals.