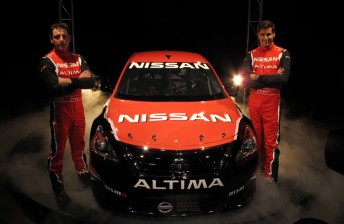 Todd and Rick Kelly flank their first Altima at the launch

The car was launched today in front of media in Melbourne’s Docklands nearly nine months after the Nissan-Kelly Racing alliance was first announced.

The team has been hard at work on both the bodywork and already revealed engine packages throughout the year, juggling the Nissan development with its current racing program.

During a speech made at the launch, Kelly paid tribute to the efforts of his near 70 strong staff, detailing that amount of work that has gone into producing the first car.

“After receiving the initial CAD in February, we’ve only had seven and a half months to design the car,” he said.

“It sounds like a fair amount of time, but it’s taken over 23,000 hours to design and build what, in my slightly biased opinion, is the most impressive race car that V8 Supercars has ever seen.

“There have been over 12,500 hours of design and simulation work, over 350 hours of machining for the bodywork tooling, over 1,500 hours of making moulds and the first set of panels, as well as over 900 hours of fabrication and over 2,200 hours of assembly work.

“And don’t forget the ground breaking VK56 engine, which has taken another 4,800 hours of design work, 400 hours of machining, 180 hours of assembly and 150 hours of dyno testing.

“To put that into perspective, this car that you see today is worth in excess of $1.5 million.”

He added: “This is the car that I’ve always wanted to build – a clean sheet of paper with the Car of the Future platform and an awesome looking road car with the Nissan Altima.

“It doesn’t matter where you look on this car, you’re looking at the highest level of design and attention to detail.”

CLICK HERE for Speedcafe.com’s news story on the car launch