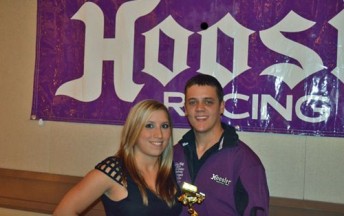 Tyler Wolf (right) succumbed to injuries after a crash at Calistoga (PIC: TJSlideways)

American Sprintcar racer, Tyler Wolf has died following a race incident at Calistoga Speedway, becoming the first death at the raceway in over 25 years.

The 20-year-old was making his first visit to the half-mile track for its 75th Anniversary event.

He went off track and collided head on with the wall on the exit of turn two and had to be extricated from the racecar in an unconscious state. Wolf was transported to the nearby St Helena hospital via ambulance where he was later pronounced dead from head trauma.

Wolf was a star on the rise, last season winning the Silver Dollar Raceway Track Championship, at 19 years of age.

The event continued on after Wolf’s crash.