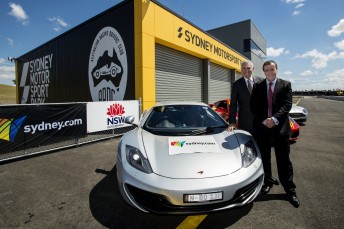 The Top Gear Festival has been locked into Sydney Motorsport Park, with the first to be held at the Western Sydney venue over the weekend of March 9-10, 2013, a week prior to the Formula 1 Australian Grand Prix.

It will be the third ever Top Gear Festival, with two being held in South Africa, most recently last year. In a deal between Top Gear, the New South Wales Government and the ARDC – the owner of Sydney Motorsport Park, the event will be held at Eastern Creek for the next three years.

Sydney Motorsport Park has confirmed the weekend will be hosted by Top Gear presenters Jeremy Clarkson and James May and will feature both on-track events, freestyle motocross, off-road challenges and static displays. Two tracks will be in operation throughout the festival. The Top Gear Festival is an extension of the wildly popular Top Gear Live format that has toured Australia in recent years.

“Unlike the previous Top Gear Live tours to Australia, the new festival format we have developed enables visitors to enjoy a full day of outdoor motoring entertainment, including world class racing, along with stunts and presenter challenges synonymous with the Top Gear television program,” said Michael Hodgson, Managing Director of Top Gear Festival Australia. “For the Sydney event, two circuits will play host to packed schedules of motor racing action as the rest of the park sees precision driving, FMX stunts and jumps, off-road challenges, some of the world’s finest supercars and much more.”

The event is being fully backed by the New South Wales Government, with an anticipated injection of $19 million coming to the economy and some 20,000 interstate and overseas visitors expected to visit NSW for the event.

“The NSW Government successfully bid for this event in conjunction with the Australian Racing Drivers’ Club (ARDC),” said NSW Minister for Tourism and Major Events, George Souris. “Sydney will be hosting the popular and high profile festival from 2013 through to 2015. It has only been held twice before, both times in South Africa.”

At the Kyalami event held in 2011, Red Bull Racing and David Coulthard were a major feature of the Festival.

Tickets will be on sale through Ticketek on a yet to be announced date.