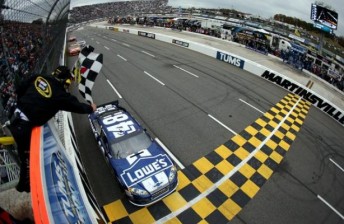 Jimmie Johnson’s quest for a sixth NASCAR Sprint Cup Series title is firmly on track after the Chevrolet driver took the points lead with victory in the Tums Fast Relief 500 at Martinsville.

Johnson now sits two points ahead of Brad Keselowski with three races remaining after the Penske Dodge pilot rallied to a sixth place finish on the 0.5 mile short track.

Meanwhile, the long-time third wheel in the championship chase, Denny Hamlin,  is now all but out of contention after electrical problems led to a 33rd place finish.

The Fedex Toyota now sits fifth in the standings behind Johnson, Keselowski, Clint Bowyer and Kasey Kahne, some 49 points adrift of the lead.

Johnson scored his fourth win of the season and seventh all-time at Martinsville after holding off a determined Kyle Busch in a five lap sprint to the flag.

Johnson’s #48 team had been one of many to elect to pit for new tyres when the penultimate caution waved 24 laps from home.

Electing not to pit, Keselowski and Dale Earnhardt Jr headed the field at the restart, before eventually falling back to sixth and 21st respectively.

Busch, Kasey Kahne, Aric Almirola and Clint Bowyer had joined Johnson in taking new tyres and rounded out the top five at the flag.

Australian Marcos Ambrose came home on the lead lap in 24th after losing ground with a pair of mid-race spins.

“I feel as focused and as prepared as I’ve ever been. We have some very smart guys with experience on this team, and everybody is managing their emotions well and working very hard on their individual positions.

“Our young group of over-the-wall guys, they’re standing the test of time. They’re dealing with a lot of pressure each time on pit road and executing very well.”

The title chase continues next weekend at Texas Motor Speedway.