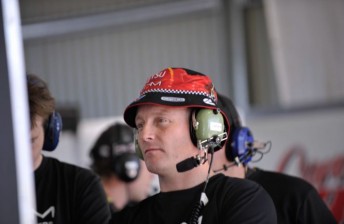 Garry Rogers Motorsport is today shaking down its first Car of the Future chassis at Winton Motor Raceway.

The squad has had a busy schedule since the Armor All Gold Coast 600, with its crew needing to prepare a spare car for Alexandre Premat to race this weekend in Abu Dhabi following Ricky Taylor’s Race 22 start line shunt, in addition to readying its 2013-specification car for its maiden laps.

GRM has confirmed that Greg Ritter will undertake the 20 lap hit-out, leaving regular drivers Premat and Michael Caruso to focus on their Yas Marina preparations.

Fujitsu-backed Dunlop Series front-runner Scott McLaughlin was also invited to take part in the shakedown but has been unable to attend due to his New Zealand V8 SuperTourer Series commitments at the weekend.

GRM’s first COTF Holden is dressed in the Fujitsu Racing livery that the team has campaigned on its cars since the beginning of the season.

The team hopes to have its second car on track by the end of next month.