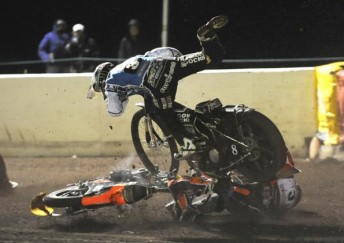 The injuries Chris Holder sustained in a Knockout Cup crash at the end of last week are worse than first thought with the Sydney-sider sustaining a broken leg and broken rib in the crash.

Initially, it was thought the newly crowned World Champion had suffered knee ligament damage in the incident, upon further inspection, the injuries were far worse.

Poole Pirates Manager, Neil Middleditch confirmed the break in Holder’s tibia and has said it will see him on the sidelines for ‘months’:

“He has broken his tibia where it joins the knee,” said Middleditch. “I don’t know whether Chris has torn or snapped his ligaments, but he’ll need a fair few months to recover.

“It may have happened at the end of the season, but there’s no good time to do it. For his season to end like this is cruel.

“I think he’ll bounce back. It was just an unfortunate incident. Mads (Korneliussen) picked up a grippy patch coming out of turn two and collected Chris along the way.”

The injuries will almost certainly ensure that Holder won’t be fit to ride in Australia this summer as the World Champion, which will be a cruel blow for Holder and his legion of Australian fans.

With Darcy Ward and Davey Watt also under an injury cloud after crashes at the end of the English season, it will be a nervous time for organisers of January’s Australian Speedway Championship.