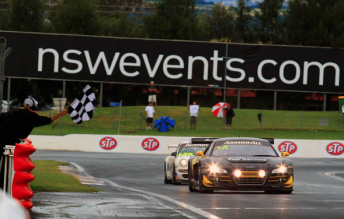 The NSW Government, through its NSW Events arm, has signed a new three year deal to support the Bathurst 12 Hour

The Liqui-Moly Bathurst 12 Hour endurance race will receive financial support from the NSW Government for the next three years.

In an extension of its current deal, member for Bathurst Paul Toole announced today that the event, featuring top-level GT vehicles and drivers from Australia and around the world, is vital in keeping Bathurst “on the map.”

“Support for the Bathurst 12 Hour demonstrates the Government’s commitment to development of regional events,” said Toole.

“This year, more than 19,000 people attended the three day event, which was broadcast throughout Australia via a three-hour highlights package and live streaming over the internet – both of which will continue into 2013.

“And next year’s event will take on an international flavour with an increased number of overseas entrants and the event being broadcast into key domestic and international tourism markets, including Asia, North America, Europe and New Zealand.

“It’s events such as this that help put Bathurst on the map as a tourist destination. Each year Bathurst attracts more than 840,000 domestic and international visitors each year, who stay for 730,000 nights and spend more than $150 million in the area.”

Next year’s Bathurst 12 Hour race will take place on February 8-10.