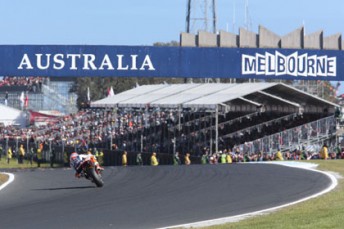 Australian Grand Prix Corporation CEO Andrew Westacott is confident that the local event can continue to prosper, despite the retirement of its leading drawcard.

Record crowds converged on Phillip Island last weekend to watch Repsol Honda star Casey Stoner compete in his final local MotoGP before he retires at the this weekend’s season-ending GP in Valencia.

Stoner did not disappoint the 122,470-strong record crowd, scoring an emphatic victory – his sixth-straight at the Island circuit.

The AGPC and MotoGP are currently in the middle of a long-term deal that will see the class return to Phillip Island until 2016, and while Westacott admits that it could take a few years for ‘the next Stoner’ to emerge, he is upbeat about the event remaining a popular fixture on the Australian sporting calendar.

“Casey is one of an era – we had the (Wayne) Gardner era, we had the (Mick) Doohan era, now this is the end of the Stoner era,” Westacott told Speedcafe.com.

“We have new riders coming through, but we’ll never have another Casey Stoner – on statistics alone, he’s the fourth best in the world.

“Already we have great Australians coming through the ranks, like Arthur Sissis and Jack Miller (in Moto3), plus other Aussies in the Supersport, Superstock and Superbikes classes.

“The event is here until 2016, it puts great money into the economy and it provides an incentive for young riders to compete locally in front of international teams.

“It will be a few years before we have a top level rider, but the future is looking strong for this event.”

Leading the charge to become Australia’s next MotoGP champion is 17-year-old Arthur Sissis.

The South Australian rookie scored his maiden Moto3 podium at Phillip Island yesterday, riding for the Red Bull KTM squad. After a mixed season, his third place finish moved him up to 11th in the world standings.

With a deal already in place to remain with the team next year, Sissis is hopeful that he can join the likes of Gardner, Doohan and Stoner as Australian motorcycle champions.

“It feels really good to get this podium. I wasn’t expecting to do it here because I’ve raced on most of the European tracks, more than here,” Sissis said.

“It’s going to be hard to do that (become the next Casey Stoner), but if I keep on going how I am now, keep on progressing through the ranks, hopefully I can be like Stoner. Or at least get into MotoGP!”

Westacott was ecstatic with the overall outcome of the 2012 Australian MotoGP.

“It’s a year’s hard work by the great team we have at the Grand Prix Corporation,” he said.

“Not only are we promoting the state to tourists, we’ve had 6500 campers, we built 11 new grandstands, the VIP facilities were sold out and we introduced Supercross for the first time which is great for the Australian motorcycle industry.”