The race was dominated by Pol Espargaro, who entered the weekend as the only man with a chance to deny Marquez the crown.

Espargaro took the lead from Marquez on the third of 25 laps before pulling away with metronomic consistency to win by a stunning 16.81s.

Briton Scott Redding also slipped by Marquez to hold second for the majority of the race before dropping to fourth in the final laps.

West ran fourth for much of the going, slowly edging his way towards the Redding/Marquez battle. Arriving on the back of the duo with just four laps remaining, West made two decisive moves – the second of which came on the very last lap – to move into the runner-up spot. 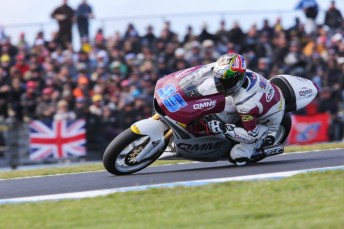 A last-corner charge from Marquez saw the Spaniard slip by Redding before falling 0.03s short of West at the flag.

Dominique Aegerter, Johann Zarco, Simone Corsi, Esteve Rabat, Randy Krummenacher and Takaahi Nakagimi completed the top 10, with less than a second separating the six riders at the completion of the race.

Finn Mika Kalio had been in the thick of the fifth-placed battle before falling at Turn 4 in the closing stages.

Regular front-runner Andrea Iannone was another to have a day to forget, with the Italian forced to retire on just the sixth lap as smoke poured from his Speed Up machine.

Thomas Luthi also had an early shower after a mid-race crash at Turn 4.

Championship winner Marquez will graduate to the MotoGP class next season, replacing Casey Stoner at the factory Repsol Honda team.