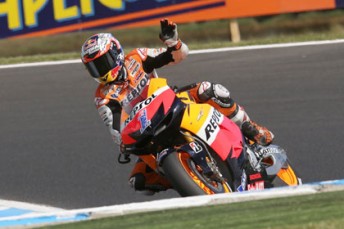 Pole-sitter Stoner fell to third off the start, but would retake the lead on just the second lap when team-mate Dani Pedrosa lost the front of his Honda at Turn 4.

With Pedrosa out of the race, the second-placed Jorge Lorenzo would need just a handful of points to wrap-up the crown before the final round in Valencia.

The situation left a somewhat dull contest to unfold in front of the 53,000 strong record crowd, with Stoner gradually edging away to be a race-high 9.2s ahead by the chequered flag.

The 27-year-old showed no signs of weakness from the ankle injury that curtailed his season, with the result marking his first win since returning from an enforced lay-off two races ago. 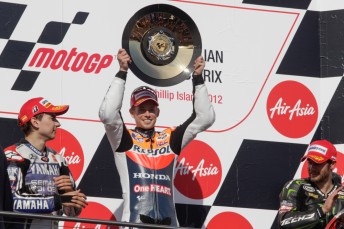 Cal Crutchlow had a lonely ride to third, while Andrea Doviziso won a race-long scrap with Alvaro Bautista and Stefan Bradl to take fourth.

Roberto Rolfo, Colin Edwards and James Ellison joined Pedrosa on the retirements list, with Ellison crashing out on just the sixth lap.

Stoner’s victory capped off a near perfect day for the local fans at Phillip Island after Australians Anthony West and Arthur Sissis made podium appearances in the Moto2 and Moto3 classes respectively.

The 2012 MotoGP season concludes with Grand Prix of Valencia in two weeks time.