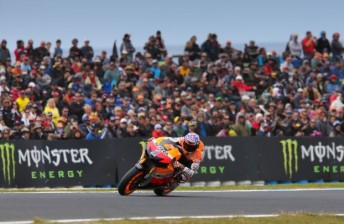 Casey Stoner has completed his domination of the pre-race sessions at the Air Asia Australian Motorcycle Grand Prix by topping the Sunday morning warm-up.

The fastest man in all three practice sessions and qualifying, Stoner’s warm-up best of 1:29.888s proved 0.45s quicker than that managed by championship leader Jorge Lorenzo.

Three riders fell during the 20 minute session, with Valentino Rossi the first to go on just his third lap. The Italian kicked away debris in frustration after losing his Ducati into MG Corner. He later mounted his spare bike to set the 12th fastest time.

Australian Kris McLaren also fell early in a session where he needed to impress in order to gain a start after failing to make the qualifying cut-off yesterday.

Karel Abraham too found himself walking back to the pits after being spat off his Ducati heading into Honda Corner. Like Rossi, the German returned on a spare bike to set his fastest lap on his final of the session.

The 20 minutes were not completely trouble-free for Stoner, who narrowly managed to avoid dropping his Honda after losing grip at MG at the end of his first of two runs.

The session was held in overcast but dry conditions, with no rain forecast for the afternoon.

The 2012 Air Asia Australian Motorcycle Grand Prix is scheduled to get underway at 1600 local time.