No retirement regrets for Stoner after Phillip Island fairytale

No retirement regrets for Stoner after Phillip Island fairytale 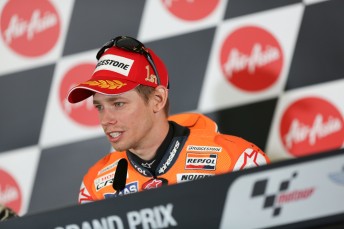 Casey Stoner says he has no regrets over his decision to retire from motorcycle racing at the end of the 2012 season following a fairytale sixth consecutive Australian Grand Prix victory at Phillip Island.

The 27-year-old enjoyed one of the greatest days of his stellar career at the picturesque Victorian venue, securing the race victory in dominant fashion in front of a record crowd.

Despite the joy of the occasion, the two-time world champion was quick to underline the firmness of his retirement decision, which he announced in May citing a lack of continued enthusiasm for the sport.

“I’m very established with where I’m going, I’m not changing my mind every couple of minutes,” he said.

“I have so much respect, especially for Dani (Pedrosa) and Jorge (Lorenzo). I’ve been racing them my whole career. We’ll been challenging each other and fighting with each other for so many years.

“There’ll definitely be something missing inside sometimes, but I’ll still get to watch them and I’ll definitely come to some Grand Prixs to enjoy it.”

Although highly pleased with his accomplishment today, Stoner remained true to his characteristically level-headed demeanour when asked to explain his emotions at the result.

“I’m not a very emotional person so I’m not really going to talk about emotions and how it is,” he said.

“I think it says enough to see all the people out on the pit straight and the reception we got for winning this race.

“I’ve had so much support over the years racing at home here but this year was just so much more than all the years previous.

“It was quite something to take in. I actually took notice in the last few laps just to see everyone cheering me on.

“It was just amazing to see the amount of people standing up in the grandstsands. It was just a fantastic weekend.

“The Australians did a great job today,” he added, citing the podium finishers for countryman Anthony West and Arthur Sissis in the Moto2 and Moto3 races respectively.

“We all had great results for everybody to celebrate. I actually had a bit of pressure on me going into the race to get the top spot.

“I had a little bit of extra pace over everybody this weekend and we sort of just controlled it.”

Stoner also underlined his determination to see the season out with another victory at the final race at Valencia in two weeks time.