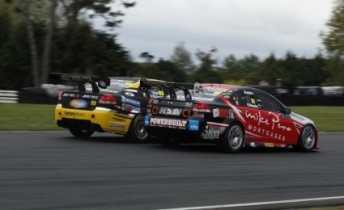 Murphy passes McLaughlin at the hairpin

Greg Murphy continued his phenomenal Pukekohe record by producing a copybook drive to win the 70-lap feature race at the International 500 endurance race.

The victory revived memories of the V8 Supercar era at the Counties circuit when Murphy was appropriately called ‘The Prince Of Pukekohe.’

CLICK HERE for the full race report and results on Speedcafe.co.nz …