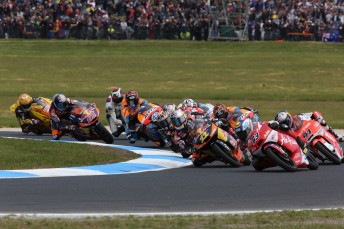 Pole-sitter Cortese dropped as low as fifth in the opening corners before working his way back to the lead by one-third distance.

Cortese and eventual second-place finisher Miguel Oliveira then managed to break away from the chasing pack, with both riders spending time at the front before the German put the hammer down with three laps to go, eventually taking the win by 2.11s.

The result marked Oliveira’s best-ever Grand Prix finish, and came after the Portuguese rider fell from his Suter twice during the morning warm-up session.

The battle for third proved intense right to the chequered flag, with Sissis edging fourth-placed Alex Rins by just 0.05.

Danny Kent, Romano Fenati, Alessandro Tonucci and Efren Vazquez filled fifth through eighth, with Vazquez less than one second behind Sissis at the finish.

Category wild man Maverick Vinales had been in the thick of the third-placed battle before crashing out at Siberia with eight laps to go.

Jonas Folger, Luis Salom and Louis Rossi joined Khairudden in the top five during the early laps but each had their chances dashed by jump-start penalties.

Australian Jack Miller was another to fall foul of start-line eagerness, with the Australian eventually finishing 21st after serving his ride-through.