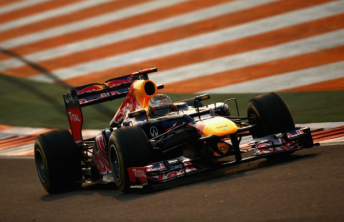 Sebastian Vettel and Mark Webber have locked out the front row of the grid at the Indian Grand Prix, the third GP in-a-row that the champion Red Bull Racing team has achieved the feat.

On his final qualifying lap, Vettel defeated Webber having been behind the Australian after setting a slow first sector time.

Vettel’s pole position is the 35th of his career.

Webber was forced to abort his final lap after making a mistake.

The Red Bull pair was over 0.2s ahead of McLaren’s duo of Lewis Hamilton and Jenson Button.