V8 champ willing to take Casey Stoner under his wing

V8 champ willing to take Casey Stoner under his wing 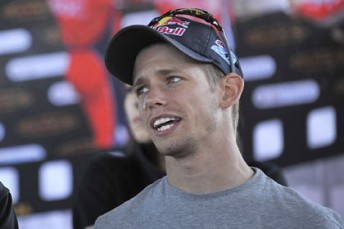 V8 Supercars Championship leader Jamie Whincup says that he will take Casey Stoner under his wing if the MotoGP ace decides to switch to the touring car class in the future.

Stoner will retire from MotoGP at the end of this season, and is aiming to score an unprecedented sixth-straight Australian MotoGP race win this weekend.

Since announcing his impending retirement in May, the Repsol Honda rider has expressed a keenness to try his hand at V8 Supercars, but says he would need many testing miles before contemplating competition.

CLICK HERE for Speedcafe.com’s previous news story on Stoner and his V8 future.

Stoner has a close association with Whincup’s Roland Dane-owned Triple Eight team, driving the squad’s ride car late last year. Stoner has also been seen inside the Triple Eight garage on a number of occasions, including at the Bathurst 1000 earlier this month.

During that time, Whincup has developed a tight relationship with the MotoGP star. Whincup is confident that Stoner can get up to speed in a V8 and says he’ll be there to guide him through the steep learning curve.

“It doesn’t matter what he races, he’ll be fast. A racer is a racer,” Whincup told Speedcafe.com of Stoner.

“As long as he can work out the craft, it doesn’t matter if it’s on the road or on water, a lot of the same racing principals apply.

“It would be a big effort, but he’s still young. It’s not like he’s in his 40s trying to do it. He’s in his 20s, so he should be able to adapt to different things quite quickly.

“He’s a good bloke. He has become a good friend of mine now, having spent some time together, so I’ll be helping him out if he deciders to come in the V8 Supercars direction.”

Whincup says he’ll be on the edge of his seat this Sunday, hoping that the injured Stoner can challenge the likes of Jorge Lorenzo and Dani Pedrosa at Phillip Island’s Air Asia Australian MotoGP.

“Phillip Island is an important one for him,” Whincup said.

“I wouldn’t say I’m nervous for him, but if he runs a podium, I think that’s a great weekend for him. Lets not underestimate how much his foot is affecting his riding and those couple of months off.

“I hope he really enjoys his last time at Phillip Island in this era.”