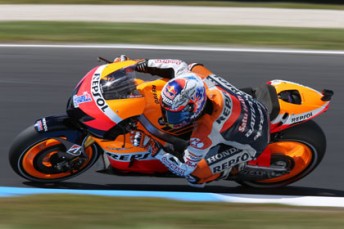 Casey Stoner will head into today’s MotoGP qualifying session as the red hot favourite to score pole position after dominating the third and final practice session at the Phillip Island circuit this morning.

Having topped both practice sessions yesterday, Stoner recorded the fastest time of the weekend so far in Practice 3, with his 1:29.67s effort proving over one second quicker than his nearest competitor.

Stefan Bradl was eighth, while the factory Ducati pair of Valentino Rossi and Nicky Hayden continued their Friday struggles in ninth and 12th respectively.

Hector Barbera fared even worse in 13th having walked away from a mid-session crash at MG Corner.

Dovizioso also took a minor tumble during the 45 minutes of running, while Bautista was lucky to escape a collision with a flock of seagulls.

Avintia Blusens’ Australian substitute rider Kris McLaren continued to bring up the rear of the field, although was able to shave a full two seconds from his Friday best to move within two seconds of his nearest rival.

Practice 3 was run in cool but dry conditions. Isolated showers are predicted to hit Phillip Island throughout the day.

Qualifying for the Air Asia Australian Motorcycle Grand Prix is set to kick-off at 1455 this afternoon.