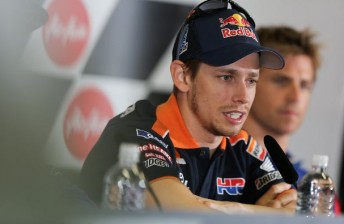 Casey Stoner says he was lucky that a crash in qualifying for the Air Asia Australian Motorcycle Grand Prix did not do further damage to his already injured right-ankle.

Stoner, who went on to score pole using his spare Repsol Honda, crashed at Honda corner just 20 minutes into the session.

The 27-year-old was left perplexed by the incident, which did not occur on a hot lap.

“I was on my out-lap there on the hard tyre and the thing just decided to flick me,” he explained after the session.

“I was going very slowly into Honda (Corner) and I had no way to stop it.

“I was very fortunate that I didn’t come down on my foot. If it was the other way, it would have been a different story.”

Tomorrow will see Stoner gunning for a sixth consecutive victory at Phillip Island in his penultimate race before retirement.

With his ankle injury proving less of a burden around the flowing Victorian venue than it had done in the previous two races in Japan and Malaysia, Stoner is optimistic of a victory tomorrow.

“To be honest, it has been great to be back, and not just back at this circuit, but feeling a little bit more comfortable,” he said.

“This circuit goes left on most of the critical corners, so I’m actually able to relax on the right hand side because they’re not so critical and I can put more effort in on the left.

“It’s been nice to ride one of these bikes around this circuit again. It could well be my last, and I’m trying to enjoy every minute of it. We’ve had a fantastic weekend so far and just getting faster and faster.

“I’m just very happy to be on pole for my home grand prix and hopefully we have something to celebrate tomorrow for everybody.”