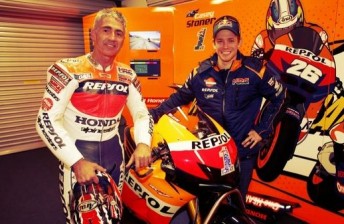 Doohan traded notes with Casey Stoner after the ride

Mick Doohan has sampled a latest-generation Repsol Honda RC213Vs – the first time he has ridden a MotoGP bike in close to a decade.

The five-time world champion accepted an invitation from the factory Repsol Honda squad to complete demonstration laps of the Phillip Island circuit as a part of this weekend’s Air Asia Australian MotoGP weekend.

Doohan will get another chance on the bike tomorrow afternoon, but despite lapping 13 seconds slower than Casey Stoner’s blistering practice time yesterday, Doohan says he enjoyed the experience.

“I was rusty, but it felt good,” Doohan told Speedcafe.com at Phillip Island.

“It’s a fantastic opportunity that Repsol Honda has presented me to ride this year’s bike, so I can’t thank them enough. And also to the Australian Grand Prix Corporation for making it happen.

“It was a lot of fun, (but) I’m glad I’m not trying to line-up and go and qualify later this afternoon!”

Today marks the first time that Doohan, 47, has ridden a MotoGP bike since the mid-2000s. The last time he saddled up was in Japan, riding one of the 990cc capacity Hondas.

“It (the 1000cc motor in the 2012 bike) is a different engine. I thought it would be a flat, torquey engine and after speaking to Casey and Dani and the guys, that’s what they told me to expect,” he said.

“I rode the 990cc a few years ago, which was similar, but they had the bike de-tuned, which is understandable because I’m de-tuned (laughs).

“Maybe next time we’ll give it more of a run.”

Doohan made 137 starts in the premier class of motorcycle racing – all aboard Honda machinery. The Gold Coast resident won 54 Grands Prix and five consecutive titles (1994-1998).

The final practice session for MotoGP commences at 1110, followed by qualifying at 1455.