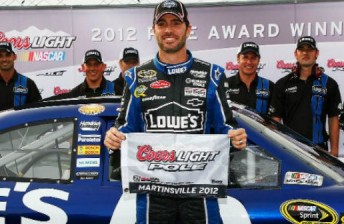 The pole position is the 28th of Johnson’s Sprint Cup career and his third of the 2012 season.

Brad Keselowski, who holds a seven point lead over Johnson with four races remaining, had a difficult run and will start just 32nd.

Australian Marcos Ambrose also struggled and will start one place behind the Penske Dodge driver.

“We just didn’t have much that lap,” commented Ambrose. “We were a little tight in the middle and loose off the corners.”

Mike Bliss and J.J. Yeley both failed to qualify for the 43 car field.