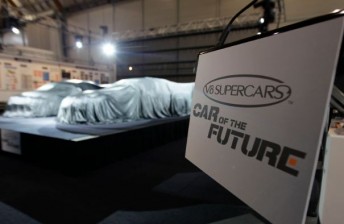 The then VE-bodied Holden prototype was unveiled alongside its Ford Falcon FG counterpart in Sydney last year, but the updated VF version will remain under wraps for some time to come

V8 Supercars is conducting its latest Car of the Future aerodynamic testing with “the highest level of secrecy” in order to conceal the look of Holden’s new-model Commodore.

Not expected to hit Australian showrooms until mid-year, the VF will become the first Commodore to make its V8 Supercars debut before being available for sale when it hits the track for March’s Clipsal 500 Adelaide.

V8 Supercars is expected to begin its open-air aerodynamic comparison testing within weeks, but will not disclose specific dates or locations in order to protect the VF bodywork which has been applied to the category’s Holden prototype over recent months.

Whispers of the VF testing have been met with a sense of unease within the V8 paddock, with those not involved in the car’s development seemingly unaware that such private running would take place before the designated group aero tests.

Dismissing the notion that the car has already tested as merely a “paddock rumour”, Holden’s motorsport and sponsorship manager, Simon McNamara, was equally cagey when pressed on the company’s public launch plan for the race car. 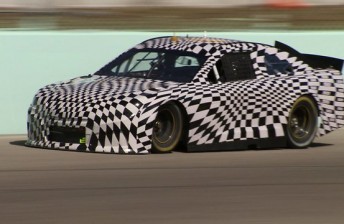 Stressing the importance of secrecy, he confirmed that the Australian launch will not be effected by a recent decision from Chevrolet to reveal its 2013 NASCAR Sprint Cup contender – which will resemble the Commodore VF-based Chevrolet SS – at Las Vegas Motor Speedway on November 29.

“You won’t see any sort of VF reveal from us until 2013,” McNamara told Speedcafe.com. “What the US do with their launches has nothing to do with Holden Motorsport. Our reveal will tie-in with what Holden has planned here in Australia.”

V8 Supercars’ commission chairman Mark Skaife told Speedcafe.com he could not comment on questions regarding any already completed testing of the Holden prototype in VF form, citing confidentiality agreements signed between the category and Holden.

“The confidentiality of new model programs need to be handled from a V8 Supercar standpoint like it would be handled if we were a car company or a contractor working for a car company,” he explained.

“We’ve signed non-disclosure agreements and we’ve entered into confidentiality agreements with car companies on forward model programs which at some point have to become reality. The strictest and industry best practice policy on these things needs to be adhered to.”

Skaife would also not been drawn into specifics on how much scope there is for individual aerodynamic validation running outside of the designated aero tests, describing the homologation of each car as a “collaborative effort” between V8 Supercars, the relevant manufacturer and its corresponding homologation team.

He added when quizzed on the importance of transparency in the aerodynamic development and testing process in order to satisfy the various parties involved: “There’ll be an element of that (transparency). We’re all big boys and there are a lot of clever people in the industry that have a vested interest in the homologation of their own particular vehicle. But having said that, they all know, as consequences of the rules of engagement, this is a parity formula…

“It’s a big engineering job (to homologate all of the Car of the Future vehicles), but it’s not like we’ve just started to think about, it’s one that’s been top of mind for a long time.”

V8 Supercars completed the initial phase of its COTF aero testing when the Falcon FG and Commodore VE were run together at the Royal Australian Air Force’s base in Gippsland, Victoria, in June. The entire process will not be completed until the first Erebus-SBR Mercedes AMG E-Class is able to be track tested – a feat not expected to occur until just weeks before the opening race.

Meanwhile, McNamara believes that the development of the VF’s aerodynamic package, which has been designed by Triple Eight Race Engineering’s technical director Ludo Lacroix in collaboration with the Holden Racing Team (which is the company’s official homologation team for V8 Supercars competition), provides an opportunity to improve on that of the now six-year-old VE.

“The VF allows us to address any shortcomings that we feel we have with the VE,” he said. “The VE is the most successful V8 Supercar of all time, but there are always areas that can be improved.”

In addition to any new external bodywork, the aerodynamic profile of all 2013-specification V8 Supercars will be significantly different to the current vehicles thanks to the fuel cell being moved from behind the rear-axle to within the cabin.