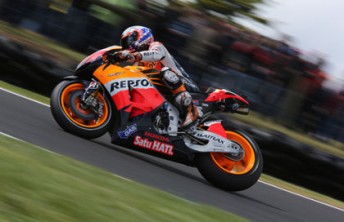 A record Friday crowd at Phillip Island has watched Casey Stoner re-establish himself as the man to beat for this Sunday’s AirAsia Australian Grand Prix.

The Repsol Honda rider, still recovering from an ankle injury sustained two months ago, topped both Free Practice 1 and 2, setting his fastest time in the second session with a sub 1 minute 30 second lap – some eight tenths faster than his Honda team-mate Dani Pedrosa.

Championship contender Pedrosa had improved steadily across the second session, but was no match for his home town team-mate, who topped his 12th consecutive MotoGP session in a row at the famous 4.4km Phillip Island track.

CLICK HERE for Speedcafe.com’s report and results from Free Practice 1.

The Friday crowd topped out at an estimated 29,120 – the highest ever recorded attendance on a Friday at an Australian MotoGP.

In fifth place was Crutchlow’s team-mate Andrea Dovizioso, who had a solid day, but will have to find something extra if he is to take third spot in the championship off Stoner this weekend.

While Stoner’s Island farewell is stealing the headlines, the second Australian in the field, Kris McLaren, finished both sessions at the tail of the field and will need to find some more pace to qualify for Sunday’s race.

The third and final MotoGP practice will be held at 1110 tomorrow, followed by qualifying at 1455.