Casey Stoner on top in opening practice at Phillip Island

Casey Stoner on top in opening practice at Phillip Island 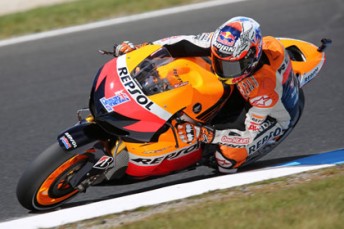 Casey Stoner has laid down an early marker today, setting the fastest time in the first free practice session ahead of the AirAsia Australian Grand Prix at Phillip Island.

The Australian champion showed no signs of his ankle injury as he set a time of 1:30.374, a commanding 0.9s faster than closest rival Jorge Lorenzo.

A brief spot of rain threatened the session, however the main shower kept away and riders only missed out a 10 minute portion of practice mid-session.

In fourth spot, over a second and a half off Stoner’s blistering pace, was Monster Yamaha Tech 3’s Andrea Dovizioso, followed closely by San Carlo Honda Gresini’s Álvaro Bautista.

The only crasher in the 60 minute session was San Carlo’s Michele Pirro, who was able to re-join the session for the final part.

Free Practice 2 will be held at 1510 this afternoon.