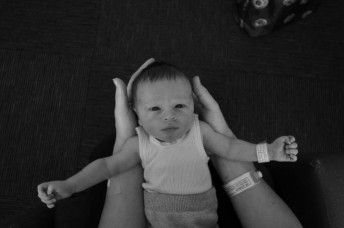 There’s been an influx of the next generation of racing identities born this week, with V8 Supercars driver Jason Bright and Carrera Cup star Alex Davison welcoming baby boys to their worlds.

Bright’s fiancee Lucy gave birth to their first child in a scheduled procedure in Melbourne on Monday. After spending his first two days without a name, Jason and Lucy confirmed his name to be Lennox Jay Bright (or L-Jay for short).

On the Gold Coast, Davison’s wife Mel gave birth to their second child – a baby brother Luke Anthony for their first child Lily.

Luke was born last night, weighing 3.5 kg, and Davison’s father Richard was proud as punch to welcome his first grandson to the world.

“Delighted and excited to announce the arrival of Luke Anthony Davison to Alex and Mel, yesterday evening around six,” he said.

“Mother and son both doing well … What a LAD!”

Speedcafe.com passes on its congratulations to the racing parents.