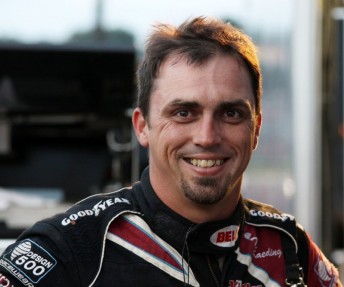 Californian Tim Kaeding will have one of the most coveted rides in world Sprintcar racing this summer when he steps behind the wheel of the Krikke Motorsports machine usually driven by Australian Champion, Brooke Tatnell.

With Tatnell’s ever-growing family requiring more time, the five-times Australian Champion will be seeing his first winter in over 20 years whilst he stays in Minnesota. Tatnell will return early next year to race for KMS in the the Australian Sprintcar Championship to be contested at Archerfield in Brisbane.

34-year-old Kaeding returns to Australian racing for the first time in six years and will take on all of the major events aboard the Toyota Genuine Parts KMS machine. He arrives in Australia in hot form, having added four World of Outlaws victories throughout 2012 to his 100-plus career main event wins.

“The Krikke Motorsports team has been the team you hear about in the US for years beating the competition with great equipment and a great driver with Brooke behind the wheel,” said Kaeding. “It is a great opportunity for me to be offered a chance to drive such great equipment and be competing with a top notch team in Australia.”

Whilst he relishes the challenge, he admits that whilst having confined his competition in the past to the East Coast of Australia, the full World Series Sprintcars trail – plus other major events such as the Grand Annual Sprintcar Classic and Krikke Boys Shootout will be a whole new ball game for him.

“I’m going to feel like a rookie again travelling to new race tracks. I’m hoping to continue the success I had over the 2012 season back home in the States and not only contend for the championship, but win a few races in the process.”

It hasn’t been an easy off-season for Krikke Motorsport team principal, Shane Krikke, who’s extensive search has been finalised with Kaeding – who comes from a renowned lineage of Sprintcar racing in California.

“It is going to be really different not having Brooke up in the truck, but we have always had the understanding that family is the most important thing,” explained Krikke. “To have someone the calibre of Tim Kaeding come and drive for us is something I am really looking forward to. Tim is a great guy, races hard and can get the job done.”

It isn’t just on the driver front that change is aplenty at KMS, with long time Crew Chief Pete Caporn moving on and being replaced by the well-respected Brendan Telfer. What hasn’t changed is the highly successful Aussie-built combination of Cool Chassis and Maxwill-tuned Motors.

The World Series Sprintcars Championship gets underway later than usual in 2012, with round one to be contested at Adelaide’s Speedway City with the traditional Boxing Day night event.