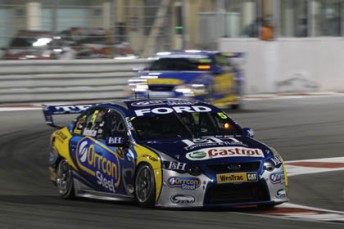 Formula One has limited the track time of V8 Supercars to three x 12-lap races at the Yas Marina circuit with no pit stops.

CLICK HERE for Speedcafe.com’s story on the complete format for the event.

CLICK HERE for Speedcafe.com’s news story regarding the television times for Australian viewers.

Edwards is buoyed by the chance of a repeat of the short qualifying races at the Sandown 500 meeting last month which produced two highly entertaining races.

“With Abu Dhabi, the immediate thought is that three races of 12 laps is not a lot of racing,” Edwards told Speedcafe.com.

“But I instantly think about Sandown with no tyres, no fuel and 2x20lap races where everyone just went for it and it was fantastic.”

According to Edwards, the Abu Dhabi format will not be unlike Sandown where 100 percent driver input will determine the outcome of the race and not computer-generated race strategy.

“There is no strategy apart from ‘go.’

“Sometimes you see a guy follow someone and think ‘right well I’m going to save some fuel and get him in a pit stop’. But at Sandown what you saw was that everyone was going flat out. There was no point thinking about.

“At Abu Dhabi we are just going to put on the best show we can and take any strategy out of it.

“We used to have 2 x 200km races with pit stops so these short bursts should be thoroughly entertaining.

“A bit like the last five laps of Bathurst where we turned the screen off and said you’re on your own mate. Trim one go as hard as you bloody can.”

“You’ve got to remember you don’t want the engineers working out how they are going to manipulate the race with strategy.”

Races 24, 25 and 28 of the V8 Supercars Championship at the Yas Marina Circuit will be held on November 2-4, supporting the Formula 1 World Championship.