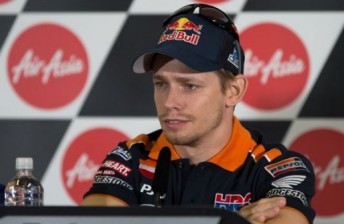 Casey Stoner says that he’s not feeling any pressure to win a sixth consecutive Australian Motorcycle Grand Prix in his penultimate race before retirement this weekend.

The 27-year-old Australian is unbeaten at Phillip Island since 2006, but faces a tough task this year having returned from an ankle-injury induced layoff just two races ago.

Speaking in a pre-event press conference at the circuit, Stoner said he will only know if he’ll be able to contend for victory once the on-track sessions begin to unfold.

“People have been expecting me to win here for more than just this year, it’s nothing new to me,” he said of the public’s expectations.

“I’m not really feeling pressure here… the only thing I can do is my best.

“I can dream all these things all I want, but when I get out on the track there’s only so much I can do, and I’m only going to know this after Friday and Saturday, seeing what my pace is and how I am doing.

“We’ve managed to get five wins in a row which have been fantastic but I’m not going to start the weekend this early expecting something more than what I’m capable of. We’ll just have to wait and see.”

Stoner has taken fifth and third placed finishes in the two races since spending three Grands Prix on the sidelines, and gave a somewhat mixed report on his progress with the injury.

“It’s definitely worse than when we first came back in Japan,” he said of the ankle.

“We’re having a lot more trouble with it day-to-day just getting around on it at all, but I don’t think it’ll effect me any differently on the bike (than in Japan and Malaysia).

“The biggest issue I’m having at the moment is just flexibility on the bike, trying to get it working. Fortunately on this track there are not too many right-hand corners that are critical. We should be a little more comfortable riding around here. It shouldn’t play too big a part.

“The main fitness problem I’m is probably just endurance. Coming back to Japan I struggled a lot with that. We weren’t really able to see how much we had improved by Malaysia (which was red flagged due to heavy rain), and here is going to be another one. It shouldn’t be too hot here either, so we should hang in here quite a lot longer.

“If we can get the bike set-up and we ride like we have done in the past then things could go a lot smoother in the last two races.”

The MotoGP riders will take to the Phillip Island circuit for two 45 minute practice sessions tomorrow.