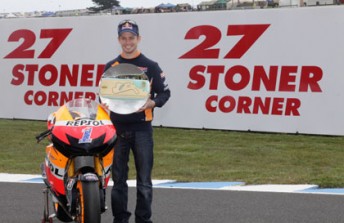 The fast, down hill left hander will be now known as Casey Stoner Corner.

The announcement was made at Phillip Island today at a press conference attended by Stoner and the world’s media.

This weekend marks Stoner’s last Australian MotoGP before retiring at the end of the season. He is aiming for six-straight wins at his home race.

Stoner joins Wayne Gardner and Mick Doohan as ‘owners’ of certain sections of the 4.4km track.

After winning the 1989 500cc world round at the then-re-opened circuit, the front straight was re-named ‘Gardner Straight’ in 1993.

In 1999, Turn 1 was changed to Doohan Corner, in honour of five-times world champion Mick.

Stoner says he loves the circuit, but isn’t sure why he has enjoyed such a long string of success at the track.

“It is not time on the track that has got my success because everybody I race against has had as many laps, if not more, than me at The Island,” says Stoner.

“The only thing I can explain is that because the track is quite slippery and with such high corner speeds, being fast there has a lot to do with balls – how much you want to hang it out.

“It’s a place that really gets the adrenaline flowing and I think most riders will say they love this track.”