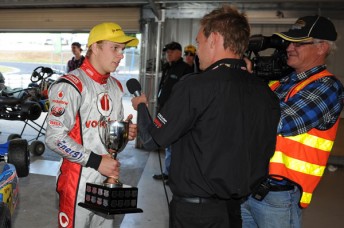 Organisers of the Castrol EDGE CIK Stars of Karting Series have today announced a four-week television schedule highlighting the dramatic finish to the 2012 Championship.

During November, Friday night will become ‘karting night’ on the SPEED Channel (Foxtel Channel 512), with the series to be featured over four weekly shows.

Filmed at the final round of the 2012 Championship, the 30-minute broadcasts capture all of the action from each of the Pro categories, with a program also dedicated to the three Challenge categories.

The broadcasts will be hosted by Chad Neylon, with commentary by Lee Hanatschek, Jack Perkins and V8 Supercar driver Michael Patrizi.

In addition to the racing, a number of feature pieces will be incorporated into the shows.  Neylon goes behind the scenes of the Drew Price Engineering factory in Melbourne and also has a chat to V8 Supercar star Mark Winterbottom about his karting days.

Neylon also finds out what makes a Pro Light (KF1) kart tick, along with a six-speed gearbox machine; he also discovers how the Dunlop Kartsport team operates.

“After returning to Australian TV late in 2011, for the first time in many years, we’ve stepped it up another notch in 2012 and I’m very pleased with the finished product,” said Series Spokesperson Lee Hanatschek.

“The whole aim of these telecasts is to to present karting in a professional manner and also provide more than just racing on the screen, it’s about the people, the industry and the sport as a whole.”

SPEED Channel Manager James Harrison is delighted to be able to have four quality shows of karting to be broadcast on Australia’s dedicated Motorsport Channel throughout November.

“A big part of our goals here at SPEED is having shows where people can not only see great motorsport action but also understand more about the sport, and the people involved in it.  This is something that this year’s Stars of Karting shows do very well,” said Harrison

The first show will go to air at 7pm EDT(*check local guides) on Friday November 2, replay times will be advised at a later stage.