Changes to be considered for Shannnons Showdown prize

Changes to be considered for Shannnons Showdown prize 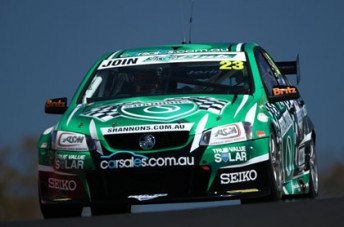 The Shannons Supercar Showdown looks set to go ahead again in 2013, but significant changes are being considered to its prize structure.

For the past two years, the reality TV program rewards a driver with the ultimate Australian motorsport prize – an entry into the famed Bathurst 1000.

The program, run by V8 Supercars team Kelly Racing and television producers WTFN and the Media Mix, awarded the 2011 prize to Cameron Waters, while Jesse Dixon took the spoils this year.

All parties are confident that a third season of the popular show will go ahead, but with a number of hurdles to consider for 2013 – including the introduction of the new Car of the Future to V8 Supercars – a different prize formula may be implemented. Kelly Racing is currently building brand-new Nissan Altimas to enter next year’s V8 championship, and with chassis availability expected to be at a premium, the team could offer the winner of next year’s Shannons Supercar Showdown a drive in the Sydney Telstra 500, rather than the Bathurst 1000.

Kelly Racing team owner/driver Rick Kelly say that the Sydney street race is one of a number of options the show will consider in 2013.

“We’re not locked into doing the same platform as we’ve done in the past,” Kelly told Speedcafe.com.

“The two other business partners are constantly looking at ways of making it bigger and better. The opportunities are endless.

“But now that we have two years successfully under the belt, we can look at ways to improve it.

“We will have the capability of entering a car at Bathurst, we should have one spare chassis by then, or it could end up being that the winner gets a wildcard entry at Homebush (Sydney Telstra 500).

“Those things we need to look at , but at the end of the day, it all comes back to giving young guys opportunities.”

Kelly was thrilled with the performance of this year’s Shannons Supercar Showdown squad at Bathurst, despite trying circumstances.

Only weeks before the race, experienced driver and TV personality Grant Denyer was forced to pull out of the drive with injury. First-year winner Cameron Waters was promoted into the ex-Walkinshaw Racing Commodore, prepared by Bathurst 1000 rookie team Minda Motorsport.

While never in contention for the win, Waters and Dixon remained on the lead lap for the first third of the race, eventually finishing 20th, three laps behind the winning combination of Jamie Whincup and Paul Dumbrell.

“Now, the program has done two years, and no one can argue the success of it. It has given youngsters the opportunity, which is why we started it, and Bathurst proved the success of it,” Kelly said.

“I couldn’t have been more happy with the way Jesse and Cam went about their weekend. They did an excellent job, stayed out of trouble and got the result they deserved.”