V8s to get eight hours of TV from Abu Dhabi

V8s to get eight hours of TV from Abu Dhabi 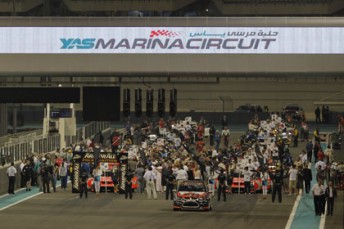 V8 Supercars will receive eight hours of coverage on the Seven Network for Races 24, 25 and 26 of its championship in Abu Dhabi.

With the race formats confirmed last week, five hours of TV time has been dedicated to qualifying and Races 24 and 25 on Saturday. Race 25 will be shown live and be broadcast on Seven’s digital channel 7mate.

Sunday will feature a two hour highlights package of Saturday’s action in the afternoon, before viewers will switch back to 7mate in the evening to watch the final race live.

CLICK HERE for Speedcafe.com’s previous story on the race format.

The commentary line-up will include experts Neil Crompton and Mark Skaife, as well as roving pit reporters Mark Beretta and Mark Larkham.

Regular host Matt White will miss the event due to conflicting commitments with Seven’s coverage of the Melbourne Cup Carnival.

All-rounder Aaron Noonan will not be at Abu Dhabi, having filled in for Crompton during Saturday’s Armor All Gold Coast 600 while Crompton recovered from illness.

Seven’s big coverage commitment will make for a huge weekend of motorsport from the Yas Marina Circuit, with Network Ten producing its regular Formula 1 coverage on Saturday and Sunday evenings.

See below for the full telecast times of V8 Supercars in Abu Dhabi on the Seven Network.