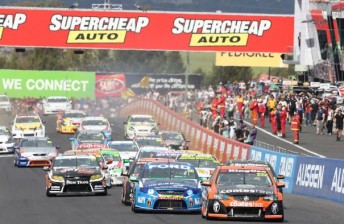 V8 Supercars has confirmed that its second-tier Dunlop Series will compete with a largely unchanged calendar next season.

The series will take in the same seven circuits as it has in 2012, with each round continuing as a support to the main V8 Supercars Championship.

The moving of the Winton championship event from November to August is the only interruption to the status quo.

Next season is expected to see capacity grids for the Dunlop Series thanks to the introduction of the Car of the Future into the main championship and the resulting flood of current specification cars.

V8 Superars says that it will award 25 automatic entries for 2013 to teams that have completed five or more rounds this year in a bid to protect those who are currently supporting the series.

Next year will mark the 14th season of the second-tier competition, which began under the name Konica V8 Lites Series in 2000.

See below for the 2013 Dunlop Series calendar