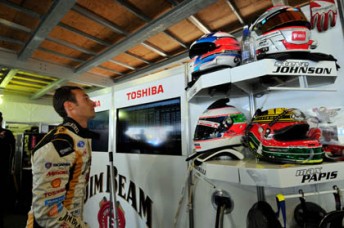 Dean Fiore is considering his short-term future as a driver in the V8 Supercars Championship.

The West Australian and his family team own the #12 Racing Entitlements Contract, and after stating an intention to keep his REC under the Dick Johnson Racing umbrella, he is evaluating who will drive it – and there will be no guarantee that it will be him.

With DJR’s team line-up and commercial backing unconfirmed for 2013, Fiore says that if proper sponsorship for his entry can’t be found for next year or future years, he’ll consider signing a driver with backing to ease the burden of running Triple F Racing’s business.

“My number one priority is to stay in the seat, especially for Car of the Future coming in,” Fiore told Speedcafe.com.

“That’s what I want to do and, with the new regulations, I want to give it a real decent crack.

“But I’m a realist. If it comes December this year and I don’t have the stuff in place to make it work, then I’m going to have to look at Plan B.”

Triple F Racing entered the V8 Supercars Championship in 2009, buying the Team Kiwi Racing REC. After running a Commodore out of the Paul Morris Motorsport stable, Fiore set up his own team on the Gold Coast, while continuing to live in Perth, WA.

This year, Fiore linked with DJR, and only in the past few weeks, has relocated himself and wife to live permanently on the Gold Coast.

From running his own team, living interstate and learning the V8 Supercars ropes, Fiore admits that his career has been a mixed affair – but one he wants to make work.

“For sure, my intention is to drive the car, but this game is as hard as it has ever been – both on-track and off-track,” he said.

“The commercial world is vastly different to what it was three years ago when we started in the game and it is increasing hard to get the support that you need to get the job done.

“There’s stuff that goes on in the background that makes this show difficult, however, it never, ever gets easier on track. The depth is incredible and you have to be at your best to even have half a chance.

“The way I’d structured my team in the past, it was good for one side to see how the business works, but terrible on the other side as far as being a driver.

“Now, moving to the Gold Coast, I’m dedicating myself to the task of driving. I didn’t realise the time and effort that it takes to solely being a driver.

“If all of the commercial side stacks up, I’m driving, but I’m not just doing it to make up the numbers.

“At the end of next year, or even the year after, if I’m not consistently in the top half of field, fighting for podiums, then I’m happy to try and find the next best thing.”

The next event of the V8 Supercars Championship will be held at the Yas Marina Circuit in Abu Dhabi on November 2-4.