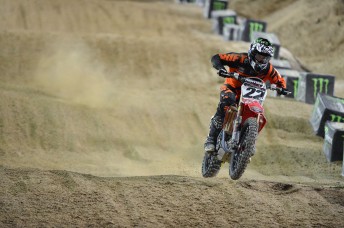 Chad Reed is an additional drawcard to Phillip Island this weekend

Chad Reed will make his return to the Terex Australian Supercross Championship this weekend, which will be held as part of the AirAsia Australian MotoGP on Saturday at Phillip Island.

Arriving in Australia with his family this morning, Reed has wasted little time in heading down to Phillip Island – where much of the focus has been around the final race on home soil for another domestic World Champion, Casey Stoner.

“There is no better test of where you’re at in terms of speed and fitness than getting out and racing guys you know are quick,” said Reed.

“In the US it’s their off-season – they’ve been at it all year and are having a break. (Returning from injury) I’m fit and recovered and really need to begin building up my race pace and I know the Australian riders are extremely fast and competitive.”

“It will be amazing to race at the Grand Prix – the atmosphere is going to be something else with it being Casey’s farewell race – hopefully the fans there get a chance to check out the Supercross as well.”

Additionally, it is Reed’s first race on Australian soil as team owner of the TwoTwo Motorsports operation.

The Pro Open category – that features Reed – and Pro Lites will take place on Saturday, with practice during the morning, heats from 1pm and the 20-lap finals from 6:15pm. Sunday will see the junior categories take place throughout the day with finals from 1:55pm.

Entry to the Terex Australian Supercross Championship round two is free to all AirAsia Australian MotoGP ticket holders.