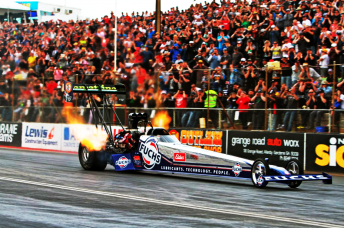 Australian Top Fuel drag racing heavyweight, Phil Lamattina has hit back at criticism levelled at the opening round of the Australian Championship across the weekend in Adelaide, which attracted four cars.

Lamattina says the condition is in line with other forms of motor racing in Australia.

“It’s not fair to level criticism at Top Fuel for turning up with low numbers, if you look at other forms of professional motorsport on the national stage, they are in a very similar situation in terms of competitor decline this year,” said Lamattina. “The sponsorship market is tough at the moment right across the board.”

“I can’t speak for anyone else (in Top Fuel), but we’ve worked overtime to ensure we were on track for the first round and on top of that have been able to bring a new sponsor to the sport in Elders for this season, which again was a lot of work over the last year.

“To bring an organisation like (rural services business) Elders into the sport is something we’re very proud of and hope we can grow that relationship in the future commensurate with the sport growing.”

Although the Adelaide entry was the lowest in a number of seasons in the ANDRA Top Fuel Championships, the next round at the Australian Nationals in Sydney over November 2-4 sees the field increase to six competitors, including a return of former Australian Champion, Martin Stamatis.

Lamattina believes the sport is on the right track under recently installed CEO, Mal Bulley.

“A lot of us were very sceptical when Mal was appointed after the recent history of the CEO’s role at ANDRA, but he isn’t afraid to make hard decisions which has been shown and he’s moving in the right direction,” Lamattina continued.

“They are having a go at improving the sport, making it more family friendly and a real event, which we’re all for.”

His comments were backed up by Adelaide winner, Darren Morgan.

“It was disappointing to have had a small number of cars at the weekend, but Mal is working on a big picture here and I can see where that’s going and its positive for the sport as a whole,” said Morgan. “We’re running without major backing but are trying all the time to bring new supporters in.”

Lamattina hoped the next event in Sydney would be a turning point for the sport this season.

“The Australian Nationals will have a band playing and the XXXX Retreat there, so it’s adding some extra spice to our events that motor racing fans are used to from V8 Supercars and other major events around the country.

“(The situation with the sport) is not perfect at the moment, but they are working on it and that’s all you can ask for.”

Lamattina – who debuted a stunning new blue and chrome livery in Adelaide – also ran a second car for Sydney-sider Luke Shepherd in the AIR event, however a mechanical problem the team couldn’t fix in time left Shepherd out the for the finals.

“It was unfortunate that our second car was unable to make the finals. In round two, the car set the fastest 60-foot time of the event and was hauling when we had a small hiccup.

“A parts supply issue meant that we couldn’t get the car back out, which was disappointing, especially for the fans. Our boys did their best to get it on track, but ran out of time.”

The Australian Nationals will be held at Sydney Dragway over the weekend of November 2-4 and features every professional ANDRA Drag Racing category.