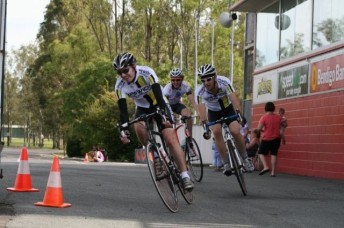 Queensland’s home of drag racing, Willowbank Raceway, will become a home of cycling under a landmark arrangement between the racetrack and Ipswich Cycling Club.

Funding was received from Ipswich City Council to upgrade the roads around the dragstrip and numerous track styles will be used, including a one-way four kilometre loop. According to Ipswich Mayor, Cr Paul Pisasale said it was a ‘win-win for the track and cyclists’.

“Funding from Ipswich City Council enabled works to upgrade existing internal roads and in the near future installation of a new gate to further improve safety during cycling events. Ipswich Cycling Club now has a ready-made circuit with access to amenities for both competitors and spectators,” Cr Pisasale said.

The three year deal sees the Club utilising the dragstrip and associated facilities as a safe area for its events held several times each month.

“While the club members needn’t worry about the hazards of the road when competing at Willowbank Raceway, there are still plenty of challenges on-hand for them,” said Willowbank Raceway Managing Director, Steve Bettes.

“With many variations in track length and surfaces providing for high speeds along the drag strip and challenging low speed corners, events held at the Raceway will provide a true ‘road-like’ experience.

“While they may be slightly different to the two-wheeled machines we are used to seeing here, after some of the events they have held here I can say they truly can pack a punch when they hit the Willowbank Raceway track!”