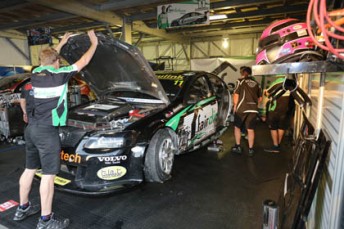 The crew work on Karl Reindler’s car at Surfers Paradise

Karl Reindler will use one of Kelly Racing’s spare Commodore chassis for the next event of the V8 Supercars Championship at the Yas Marina Circuit.

With his regular car sustaining massive damage in the second start of Saturday’s crash-marred race in the Armor All Gold Coast 600, the Fair Dinkum Sheds Racing driver Reindler will drive one of Kelly Racing’s oldest chassis – PE047 – regularly seen this year in Dreamtime Racing guise, driven by David Russell.

Due to the damage, Reindler and international team-mate Frank Montagny did not compete in yesterday’s race, and with a tight turn around from last weekend’s Gold Coast race and this weekend’s flight to Abu Dhabi, Kelly Racing team manager Rob Crawford confirmed the team is already preparing to switch chassis.

“Russell’s DVS car was prepared for Bathurst, so it will need a livery change, plus some minor changes for it to be brought up to VE II specification. Other than that, it should be good to go,” Crawford told Speedcafe.com.

“Karl’s car has to go back on the jig and get the rear cross cut out of it. It’s too much work to do between now and Abu Dhabi.

“The hit didn’t look too bad, but the amount of force that went into it, if you watch the replay, you can see the axle spinning down the track, so there was a fair bit of force to bend a bit of steel to that.

“The car is repairable, we’ll just need to strip it and get it ready for Winton.”

In other damaged car news, the #33 Fujitsu Racing Commodore, crashed by Ricky Taylor and to be driven in Abu Dhabi by Frenchman Alexandre Premat, will be repaired in time for the flight to the middle east.

The V8 Supercars will join Formula 1 at the Yas Marina Circuit in Abu Dhabi in two weeks time.