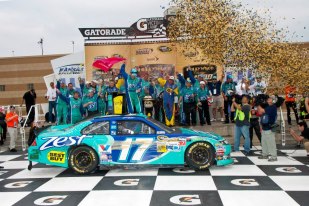 Matt Kenseth took his third win of the season

Matt Kenseth has survived a wild race in Kansas to take the Hollywood Casino 400, the third time that he has taken a win in 2012.

During the race, Kenseth was lucky not to be eliminated when he scraped the wall avoiding a spinning Aric Almirola.

The newly resurfaced Speedway in Kansas saw a number of incidents, which led to a track record 14 cautions throughout the event. Australian, Marcos Ambrose had a busy day to come home 12th. After starting back in 18th, Ambrose made his way into the top 10 before a crash mid-race.

Working overtime in the pits, the Richard Petty Motorsports team got Ambrose back on track and he fought his way through to finish just outside the top 10. This strong finish brought him through to 17th in the Sprint Cup points standings.

Jimmie Johnson was lucky to salvage a ninth placed finish. Although he led 44 laps a spin and touch of the wall on lap 135 whilst trying to pass Martin Truex hampered the Lowe’s team. He was able to remain on the lead lap through clever strategy. This leaves Johnson seven points behind Series leader, Brad Keselowski who finished eighth.

Ryan Newman, Danica Patrick and Kyle Busch were others that struck trouble during the course of the event.

Just four races remain in the NASCAR Sprint Cup, with the tight confines of Martinsville next weekend.