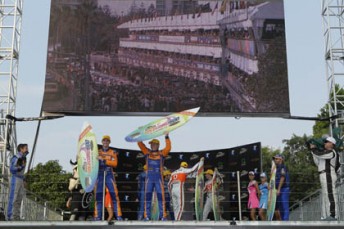 The clock is ticking over whether the Gold Coast can hang on to its motor race beyond 2013.

V8 Supercars believes that the Armor All Gold Coast 600 race, which was devised in 2010 with the unique formula of drivers sharing their cars with international racing stars, is gathering momentum.

The LNP Queensland Government led by premier Campbell Newman has instigated massive cuts in the public sector since being voted into power and taking over from a long reign by Labor-led governments.

Premier Newman was forced to miss the 2012 event as he had to lead a country cabinet meeting at Goondiwindi, four hours south-west of the Gold Coast.

Tourism Minister Jann Stuckey represented the Government flag at the race and remained publicly positive on her feelings about the Event which is locked in until 2013.

“This event will get its fair hearing as we reconsider and renegotiate as is the normal practice with every event,” she told the Gold Coast Bulletin.

It has been feared that either the Townsville street race or the Surfers Paradise race will fall on their sword after 2013 with the Government possibly unwilling to carry the burden of continuing both events.

V8 Supercars chief executive David Malone confirmed that preliminary discussions over the future of the Gold Coast and Townsville have started and have been constructive and positive.

“So we are feeling very optimistic about the future of the events in Queensland,” Malone told Speedcafe.com

“We want to put our best foot forward and we are doing a lot of work at the moment to present a very strong case.

“I think we’ve put on a fantastic event this weekend and we want to make sure that we present that in the right way.

The talks will intensify early next year on the future of the Gold Coast and Townsville beyond 2013 when firm decisions are expected to be made.

Malone is buoyed by the progress the unique international co-driver formula has had with the public, believing it is gathering pace with the people.

“I think it is absolutely hitting its straps now. Just walking around seeing the number of people in the crowd and seeing the excitement.

“When IndyCar started in 1991 at Surfers it was a new product and had to establish itself whereas I think we are an established product.

“I think planting the V8s on the Gold Coast street circuit has been a masterstroke for the local council and the Queensland Government with an Australian product.”

An aggregate crowd of 182,255, up slightly from the 2011 figure, turned up to the Surfers street track for the three-day programme, a healthy crowd but way short of the IndyCar days which were run over four days.

One team owner, who did not want to be named, believes it will not be so easy for the Government to chop the Gold Coast event which costs $6 million a year compared with $12.5 million when the American open wheelers were the headline act with V8 Supercars.

“The reality is this is not costing a huge amount of money,” the team boss said.

“And there is a return for it. It is getting exposure and I don’t think it is as clear-cut as saying they are going to cut 1000 public servants. It is more about rationalising the business.

“This state needs promoting and Surfers provides that.”