Reid wins round as Baird wraps up Carrera Cup title

Reid wins round as Baird wraps up Carrera Cup title 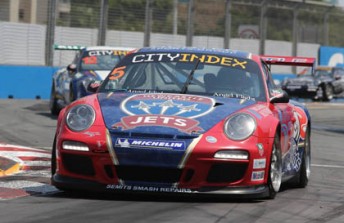 Jonny Reid at the Gold Coast

Craig Baird has wrapped up the 2012 Porsche City Index Carrera Cup in the final race of the round at Surfers Paradise today.

The Kiwi Porsche legend endured a spin in the race while leading, but he did enough to score his a record fourth Australian Carrera Cup title. He now leads the title by 180 points, and with 180 points on offer at the second finale in Sydney, he can not be beaten thanks to his 10 race wins this year.

After victory in the opening two Gold Coast races, Baird again led from the start of Sunday Race 3, however a spin on the opening lap forced him down the order and handed Reid and race lead.

Reid pulled away from the field to claim a two second victory and the round win, with Steven Richards holding off a race-long challenge from Alex Davison to take second place.

Andre Heimgartner finished fourth in the final race from Nick Foster, who started from the rear of the field. Daniel Gaunt, Shae Davies and a recovering Baird.

“I never thought I’d be leaving with the championship, I came into this round thinking I’d like to have a race win or two and keep the points gap to at least what it was or try to extend it,” said Baird.

“I’d go as far as to say that this is the best one. There were a solid five or six cars and drivers that were capable of winning the championship at the beginning and we’ve won 10 so far from 21 races and got more poles than anyone else. Now’s I’m just looking forward to Homebush and having a round without too much pressure.”

Reid was also ecstatic with his performance and his third round win of the season.

“Some people may look at it as though we got handed the round win, but we certainly put the put the pressure on from the start and made sure Baird had the hardest job possible. It would have been a good battle, the car was fantastic and even on used rubber we were setting really good times,” said Reid.

Placed behind Baird in the race was Twigg, who finished first in the Elite Class for the round.

“All the Elite Class guys drove at the same pace; I don’t think I was the fastest, I just had better track position. I just hope everyone is on the same pace at Homebush, it make it such a more enjoyable race meeting for us,” said Twigg.