Mikko Hirvonen on the brink of maiden WRC Citroen win

Mikko Hirvonen on the brink of maiden WRC Citroen win 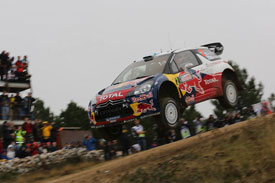 Only two stages stand in the way of Mikko Hirvonen hoisting his first World Rally Championship win for Citroen in Rally Italia on the island of Sardinia.

With his illustrious teammate Sebastien Loeb out and several other contenders also dropping out of the rally Hirvonen has two relatively short stages to run before he breaks through and cements second place in the WRC Championship.

Evgeny Novikov is the nearest rival but needs to rely on something going awry with Hirvonen’s Citroen with almost 1min30secs to make up.

Novikov’s Ford M-Sport teammate Ott Tanak holds the final podium place but is 2:20s behind. If Tanak manages to hold on it will be his best WRC result.

While everything is going right for Hirvonen, there was a barnstorming effort from Mads Ostberg (Adapta Ford) who was stung early in the rally with driveshaft issues but managed four stage victories.

He shot up the standings to fourth passing Australian Chris Atkinson along the way with the Aussie hamstrung with handling issues in the Mini.

Atkinson has dropped to sixth overall with Sebastien Ogier in fifth in the Super 2000 Skoda which highlights the problems former Subaru factory driver Atko has had to contend with in the errant Mini.

Jari-Matti Latvala and Petter Solberg are back running and although they are quick they are well down the order after SS14.