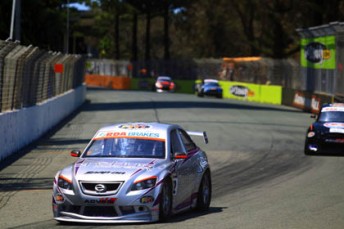 Josh Hunt has taken a close win in the final race of the FW1 Aussie Racing Cars Series at the Surfers Paradise circuit today.

The pair switched positions at the head of the field on a number of occasions, but Hunt did enough to hold on for his and the team’s first Aussie Racing Car win.

Second place for Young was enough for him to secure the round win and keep the title fight alive with one round to go.

Champoionship contender Kyle Clews had a horror race, dropping out on the ninth lap.

The Holden Cruze scored its first race finish, with all-rounder Jack Perkins taking 15th place from the back of the field. After a weekend of mechanical drama, it was a strong result for the new car.

The final round of the FW1 Aussie Racing Cars Series will be held at Winton Motor Raceway on November 16-18.