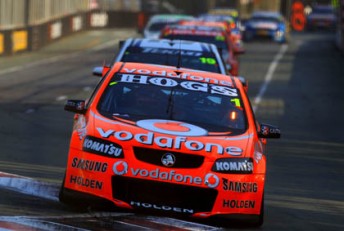 The tricky launch procedure of the cars came under scrutiny in the opening 300km leg which did not start until an hour after the scheduled starting time after two crashes.

Initially American rookie Ricky Taylor, who has never performed a standing start in a competition race car before the GC600, ended on his roof seconds after the start after being caught up in a chain reaction triggered by the team’s sister car which started slowly for James Hinchcliffe.

On the second restart there was another nasty incident when Nicolas Minassian stalled and was then collected by Franck Montagny.

Will Power, who ended up helping Mark Winterbottom to finish third in the FPR Falcon, stalled on the third restart and was lucky not to have caused another startline shunt.

Whincup, who went on to win the race alongside Sebastien Bourdais, admitted the V8s were technically challenging to launch perfectly off the line.

“They are seriously tough cars to get off the line,” Whincup began.

“The guys that did it up the front did it unbelievably well not knowing the car that well.

“To get a clean start is hard work for those guys.

“Back in the pack that’s what happens but that’s part of the sport. I’m sure a lot of the guys after a lot of false starts today will have had a bit of practice and will be much better tomorrow.”

The primary drivers do not believe the incidents are reason to call for rolling starts to be introduced to the event next year.

IndyCar star Power recovered well from his failed getaway but in the fury to hustle the car in the opening lap ended up flat spotting a tyre.

“The second start was my best,” Power said.

“The third one I pretty much stalled and I got going eventually and I flat stopped a wheel pretty bad on the first lap.

“But I was determined to give Mark the car with no problems.”