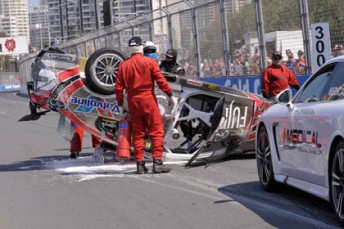 After a crash-marred day on the Surfers Paradise streets yesterday, the V8 Supercars Championship field will be minus three cars for today’s second leg of the Armor All Gold Coast 600.

Tony D’Alberto/Vitantonio Liuzzi, Karl Reindler/Franck Montagny and Greg Ritter/Ricky Taylor will all be missing in action after their cars sustained damaged deemed too extensive to repair.

The #11 Fair Dinkum Sheds entry had the front left wheel ripped off it in the second start after another start line crash.

CLICK HERE for Speedcafe.com’s news story on the D’Alberto/Liuzzi yesterday.

The D’Alberto has team has stated that its car will be repaired for Abu Dhabi, while Reindler told Speedcafe.com that it will be touch and go if that chassis is used for the next event at Abu Dhabi in two weeks time.

Garry Rogers Motorsport says that it will also assess whether to repair the #33 car or use one of its spare chassis for the overseas race.

Qualifying for Race 24 of the V8 Supercars Championship on the Gold Coast will be held at 1115 followed by the race at 1340.