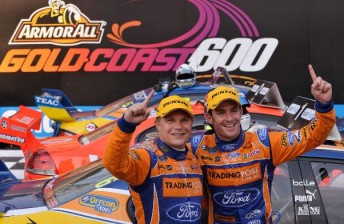 Ford factory driver Will Davison transferred his anger into raw pace today, telling of his frustration at seeing a championship go begging.

Davison has had his most successful year in terms of race wins in 2012, yet inconsistency has seen him fall away from contention after leading and pressuring good friend and ex-housemate Jamie Whincup earlier in the season.

The Melbourne-based grandson of multiple Australian Grand Prix winner Lex Davison unleashed a brilliant mix of speed and strategy to win Race 23 at the Gold Coast alongside team-mate and ex-Formula 1 flyer Mika Salo.

The Trading Post Falcon finished just 18th yesterday after Davison crashed on his out-lap, leaving him to lament another lost opportunity in a year where he has netted seven race victories.

“There was definitely a bit of… I was going to get the elbows out and try to hang on. It’s been a frustrating few months,” Davison said after holding out Whincup in the closing stages of the 102-lap race.

“I knew it was going to be a big fight to the end. I knew we were going to get a safety car for a bit of plastic on the road or something.

“I’m disappointed that I’ve done myself out of championship contention.  A couple of times this year I’ve had to bounce back from disappointment.

“I was back at the hotel last night and I was really angry with myself. I knew I’d use it as energy to comeback.

“I went to the beach this morning for a swim. It was a knew day, a great day and this is everything I dreamed of. I really wanted to give Mika a win and of course all my boys.

“We’ve had such a fast car the last couple of enduros and we’ve had nothing to show for it.

“But yesterday put the nail in the coffin in terms of the  championship. It’s disappointing that we’ve won seven races and we’re out of championship contention.”