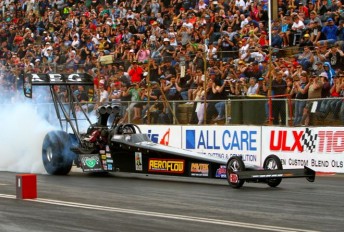 Defending Australian Top Fuel Champion, Darren Morgan has continued his positive run at Adelaide International Raceway by taking out the opening round of the 2013 ANDRA Drag Racing Top Fuel Series.

Morgan took his Aeroflow dragster to victory lane, defeating Phil Lamattina – who ironically was in the final the last time that Top Fuel raced in the City of Churches.

Morgan got to the final by outpacing Steve Read. The Queensland-based Englishman had the holeshot from the line, however Morgan was able to chase him down. Lamattina had a free run to the final by virtue of a solo pass.

His team-mate for the weekend, Luke Shepherd didn’t line up after experiencing mechanical issues, leaving just an appalling three cars to take to the start line.

The big crowd was left further disappointed when the Pro Stock division refused to race for Championship points following on from the sabotage that had taken place at the circuit during the week.

The racers reduced their activity to exhibition runs, the highlight being Shane Tucker and sister Kirsten meeting for the first time on track, with Shane taking his Monster Energy machine to a new track record.