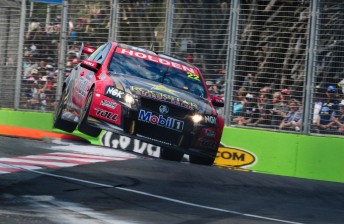 James Courtney saw another strong result go begging in the second leg of the Armor All Gold Coast 600 after clashing with Walkinshaw Racing stable-mate Russell Ingall in the closing stages.

Courtney, who shared his #22 Holden Racing Team Commodore with British GT ace Darren Turner this weekend, had been attempting to take seventh from Ingall with five laps remaining when the pair made contact.

While Ingall held the position to the flag, Courtney was forced to pit for a new tyre, resulting in a 17th placed finish.

Having fallen from second to seventh over the final 25 laps of yesterday’s race due to a broken rear anti-rollbar, Courtney described today’s race as another missed opportunity.

“We had good speed, the car was running pretty well and we’d managed to charge through to eighth despite falling to the back with a drive-through (for excessive kerb hopping at Turn 9),” Courtney told Speedcafe.com after the race.

“I was passing ‘The Mussle’ (Ingall). He got wobbly through the first chicane, and I got up the inside of him and he squashed me into the wall. We touched after that again and his exhaust cut my front tyre.

“It makes it a bit more painful when you have speed and things go wrong, but it’s good to have pace in the car and be able to race people, which we haven’t had at the start of this year.

“It’s good to be near the front and finish off the year strong. That’s one good thing we can take out of the weekend – all three cars had top 10- speed in both races. It’s just unfortunate today that we didn’t get the result we were on for.”

Courtney continues to hold down ninth in the points standings, two places behind team-mate Garth Tander.