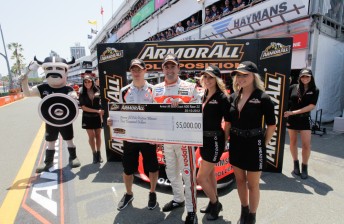 Whincup and Bourdais with the Pole Award trimmings

The TeamVodafone Holden of Jamie Whincup and Sebastien Bourdais will start the opening 300km leg of the Armor All Gold Coast 600 from pole position after the former set the fastest time in the Top 10 Shootout.

Running as the penultimate car on track, Whincup’s 1:11.65s proved 0.23s quicker than subsequent effort from this morning’s fastest qualifier Will Davison.

The result marks Whincup’s fifth Armor All Pole Award of the season, and makes him the only man eligible to win the $10,000 bonus offered to anyone who can sweep both poles across the Gold Coast weekend.

Rick Kelly proved the surprise packet of the Shootout, with the Jack Daniel’s Racing Holden recording a season best starting position of third.

Michael Caruso and Jonathon Webb filled fourth and fifth respectively, while Winterbottom could manage just sixth after having his lap compromised by Network  Seven broadcasting its commentary over his radio channel.

Winterbottom was livid at the end of his lap, initially thinking that engineer Campbell Little had been trying to tell him something before being informed that it was the commentary team.

“Channel Seven were on the earpiece the whole lap and you need all your concentration, not a bloke in your ear,” he said calmly after climbing out the the car.

“It’s disappointing. I was still quick to the second sector but then they started talking more. I thought it was Campbell on the radio but people don’t talk to you when you’re on a lap. I’m really frustrated. Sixth is still good but I think we could have got pole there.”

Fabian Coulthard improved three spots from his qualifying effort to be seventh ahead of Tony D’Alberto, James Courtney (who struggled with significant rear-locking on his lap) and Shane van Gisbergen.

The Stone Brothers Racing Ford driver saw his lap come undone when he ran down the escape road at Turn 11.

The electronic kerb-hopping sensors were left off for the Shootout, with Whincup among those claiming that the high ‘inner kerbs’ are a big enough deterrent against excessive cutting.

“There’s obviously a lot currently going on behind the garages about kerbs,” he said.

“I think the guys have done a great job with the extra kerbing, I stayed off them for most of the time which proved to be the best way.

“It was actually good to be able to stand here in this session and see what some of the other quick guys were (over the kerbs).”

Race 22 of the V8 Supercars Championship is scheduled to kick-off at 1340 local time.

TeamVodafone will start its international co-driver (Sebastien Bourdais) in the pole-sitting car – a tactic expected to be employed by the vast majority of the field.